Here you will find a collection of novels, biographies and historical books that will find very interesting. These books will give you an idea about the origins of neurology (historical books and biographies), a vivid picture of patients suffering (autobiographies, diaries and novels) and will deepen your interest in neurology. 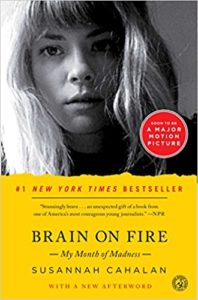 In a swift and breathtaking narrative, Cahalan tells her astonishing true story with NMDA encephalitis in a time where only few cases were reported.

Story started with growing concerns about bed bugs after she have seen some bug bites on her arm followed by emotional lability, grandiose delusions and ideas of reference that progressed to near-catatonic stage. Only a small piece of neurological examination has shifted the diagnosis from primarily psychiatric to neurological. This was when Dr Souhel Najjar did a thorough exam which revealed a left sided neglect when Susanah drew the clock face on a piece of paper.

Dr Souhel Najjar, the NYU professor of neurology of Syrian origin proved that detailed neurological examination could shift the whole differential diagnosis and sail the ship safely to the shore. 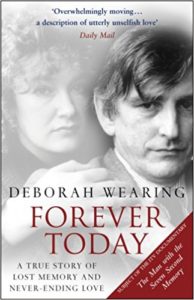 About: Chronic anterograde and retrograde amnesia

Clive Wearing is one of the most famous, extreme cases of amnesia ever known. In 1985, while at the height of his success as a conductor and BBC music producer, Clive contracted HSV encephalitis that destroyed both hippocampi parts of his frontal lobes resulting in inability to convert short term memories to long term memories.

His memory span was only 5-30 seconds which made him trapped in a limbo of the constant present where every conscious moment was as if he had just woken from a ten-year coma.

For seven years he was kept in the general ward of a London hospital while his wife Deborah campaigned for better conditions and searched hopelessly for a cure. As damaged as Clive was, the musical part of his brain was unaffected, as was his passionate love for Deborah. Finding there was no way to bring Clive back, Deborah eventually fled to America to start her life again. Then, miraculously, in their transatlantic phone calls she noticed Clive starting to recover some of his memory, and she was pulled back to England. Today, although he still lives in care, they are closer than ever. 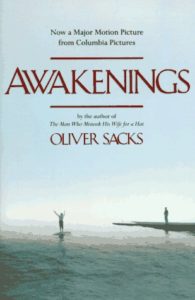 The remarkable story of a group of patients who contracted sleeping-sickness during the great epidemic just after World War I. Frozen for decades in a trance-like state, these men and women were given up as hopeless until 1969, when Dr. Oliver Sacks gave them the then-new drug L-DOPA, which had an astonishing, explosive, "awakening" effect. Dr. Sacks recounts the moving case histories of his patients, their lives, and the extraordinary transformations which went with their reintroduction to a changed world 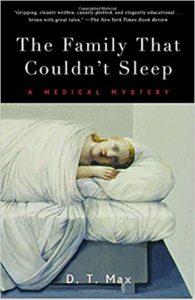 The Family That Couldn't Sleep: A Medical Mystery

Goodreads: For two hundred years a noble Venetian family has suffered from an inherited disease that strikes their members in middle age, stealing their sleep, eating holes in their brains, and ending their lives in a matter of months. In Papua New Guinea, a primitive tribe is nearly obliterated by a sickness whose chief symptom is uncontrollable laughter. Across Europe, millions of sheep rub their fleeces raw before collapsing. In England, cows attack their owners in the milking parlors, while in the American West, thousands of deer starve to death in fields full of grass.

What these strange conditions–including fatal familial insomnia, kuru, scrapie, and mad cow disease–share is their cause: prions. Prions are ordinary proteins that sometimes go wrong, resulting in neurological illnesses that are always fatal. Even more mysterious and frightening, prions are almost impossible to destroy because they are not alive and have no DNA–and the diseases they bring are now spreading around the world.

In The Family That Couldn’t Sleep, essayist and journalist D. T. Max tells the spellbinding story of the prion’s hidden past and deadly future 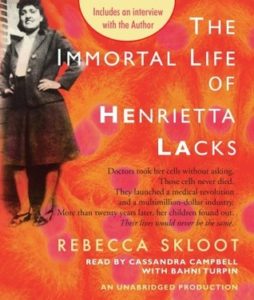 The Immortal Life of Henrietta Lacks

Goodreads: Her name was Henrietta Lacks, but scientists know her as HeLa. She was a poor Southern tobacco farmer who worked the same land as her slave ancestors, yet her cells—taken without her knowledge—became one of the most important tools in medicine. The first “immortal” human cells grown in culture, they are still alive today, though she has been dead for more than sixty years.

Now Rebecca Skloot takes us on an extraordinary journey, from the “colored” ward of Johns Hopkins Hospital in the 1950s to stark white laboratories with freezers full of HeLa cells; from Henrietta’s small, dying hometown of Clover, Virginia — a land of wooden slave quarters, faith healings, and voodoo — to East Baltimore today, where her children and grandchildren live and struggle with the legacy of her cells.

As Rebecca Skloot so brilliantly shows, the story of the Lacks family — past and present — is inextricably connected to the dark history of experimentation on African Americans, the birth of bioethics, and the legal battles over whether we control the stuff we are made of. 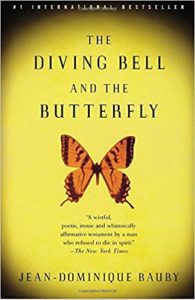 The Diving Bell and the Butterfly

About: Locked in syndrome

Goodreads: In 1995, Jean-Dominique Bauby was the editor-in-chief of French Elle, the father of two young childen, a 44-year-old man known and loved for his wit, his style, and his impassioned approach to life. By the end of the year he was also the victim of a rare kind of stroke to the brainstem.  After 20 days in a coma, Bauby awoke into a body which had all but stopped working: only his left eye functioned, allowing him to see and, by blinking it, to make clear that his mind was unimpaired. Almost miraculously, he was soon able to express himself in the richest detail: dictating a word at a time, blinking to select each letter as the alphabet was recited to him slowly, over and over again. In the same way, he was able eventually to compose this extraordinary book.

By turns wistful, mischievous, angry, and witty, Bauby bears witness to his determination to live as fully in his mind as he had been able to do in his body. He explains the joy, and deep sadness, of seeing his children and of hearing his aged father's voice on the phone. In magical sequences, he imagines traveling to other places and times and of lying next to the woman he loves. Fed only intravenously, he imagines preparing and tasting the full flavor of delectable dishes. Again and again he returns to an "inexhaustible reservoir of sensations," keeping in touch with himself and the life around him. 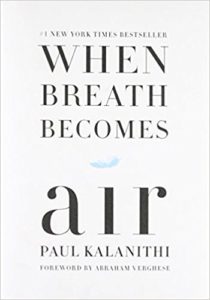 Goodreads: A profoundly moving, exquisitely observed memoir by a young neurosurgeon faced with a terminal cancer diagnosis who attempts to answer the question What makes a life worth living?

At the age of thirty-six, on the verge of completing a decade's worth of training as a neurosurgeon, Paul Kalanithi was diagnosed with stage IV lung cancer. One day he was a doctor treating the dying, and the next he was a patient struggling to live. And just like that, the future he and his wife had imagined evaporated. When Breath Becomes Air chronicles Kalanithi's transformation from a naïve medical student "possessed," as he wrote, "by the question of what, given that all organisms die, makes a virtuous and meaningful life" into a neurosurgeon at Stanford working in the brain, the most critical place for human identity, and finally into a patient and new father confronting his own mortality.

What makes life worth living in the face of death? What do you do when the future, no longer a ladder toward your goals in life, flattens out into a perpetual present? What does it mean to have a child, to nurture a new life as another fades away? These are some of the questions Kalanithi wrestles with in this profoundly moving, exquisitely observed memoir.

Paul Kalanithi died in March 2015, while working on this book, yet his words live on as a guide and a gift to us all. "I began to realize that coming face to face with my own mortality, in a sense, had changed nothing and everything," he wrote. "Seven words from Samuel Beckett began to repeat in my head: 'I can't go on. I'll go on.'" When Breath Becomes Air is an unforgettable, life-affirming reflection on the challenge of facing death and on the relationship between doctor and patient, from a brilliant writer who became both. 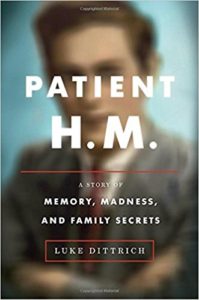 Patient H.M.: A Story of Memory, Madness, and Family Secrets

Goodreads: In 1953, a twenty-seven-year-old factory worker named Henry Molaison—who suffered from severe epilepsy—received a radical new version of the then-common lobotomy, targeting the most mysterious structures in the brain. The operation failed to eliminate Henry’s seizures, but it did have an unintended effect: Henry was left profoundly amnesic, unable to create long-term memories. Over the next sixty years, Patient H.M., as Henry was known, became the most studied individual in the history of neuroscience, a human guinea pig who would teach us much of what we know about memory today.

Patient H.M. is, at times, a deeply personal journey. Dittrich’s grandfather was the brilliant, morally complex surgeon who operated on Molaison—and thousands of other patients. The author’s investigation into the dark roots of modern memory science ultimately forces him to confront unsettling secrets in his own family history, and to reveal the tragedy that fueled his grandfather’s relentless experimentation—experimentation that would revolutionize our understanding of ourselves.

Dittrich uses the case of Patient H.M. as a starting point for a kaleidoscopic journey, one that moves from the first recorded brain surgeries in ancient Egypt to the cutting-edge laboratories of MIT. He takes readers inside the old asylums and operating theaters where psychosurgeons, as they called themselves, conducted their human experiments, and behind the scenes of a bitter custody battle over the ownership of the most important brain in the world.

Patient H.M. combines the best of biography, memoir, and science journalism to create a haunting, endlessly fascinating story, one that reveals the wondrous and devastating things that can happen when hubris, ambition, and human imperfection collide.